there was a browser, and it was good.

there were also machines, science, and the lamba calculus. they were also good.

together, they inspired elm lang. it is good.

elm is for making browser applications. it has a great guide, too. although the guide is thorough, it is unabashedly terse, much like elm itself. i would argue that the elm guide's conciseness is a feature™. however, when it comes down to actually writing code, those of us who have forgetten our functional roots, or those of us who were never introduced, have a hard time knowing how to model our programs.

so, let's write some code. below we will make a small app, from scratch, with milestones on github for those who want to code along. forewarning, this will not cover many of the topics in the guide. i will try and drop helpful breadcrumbs into the guide as we progress.

let's make an app about bikes. 🚲

the purpose of this website will be to convince everyone to go biking with me, and give them an interactive scroll experience as they click around an in-app survey.

sweet. our first app. let's take a peek in the browser: 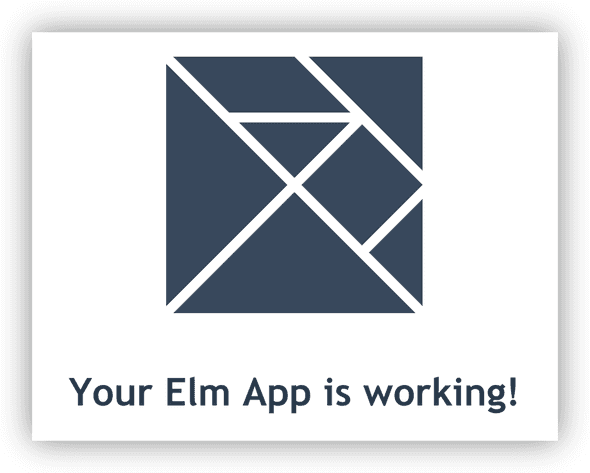 there's really not much to see yet. i removed a bit of cruft from the default boilerplate in git milestone 2, which is where we actually begin.

like so many languages, your elm program begins with a main function. it's just like old times!

the Browser.element function is critical to our app. it takes a record and wires up other functions that tell our app:

familiar with react & redux? here's what these fields loosely conceptually map into:

not so bad right? the full signature is actually:

we just saw the view function used above. very soon, we will want to add some bicycling content to the page. before we do, let's break down the current view function. we began with:

looking at the first line, we see that view is a function that takes as input a Model instance and produces a Html Msg.

next, let's break the body down bit by bit:

in the end, view is a just function that creates a Html Cmd instance. for now, you can think of this as just Html and ignore the Cmd part if you are unfamiliar. these Html instances will eventually flush out to DOM nodes, if you hadn't already guessed. view calls a bunch of other functions internally as well with Lists of attributes and Lists of children, where each of those also produce Html. if you've done any react development, you may notice how similar this signature is to React.createClass(type, props, children).

let's get a bike image on screen, and some info about the bike club.

let's add some image and css assets, and see what we get:

"we didn't need elm to do that" you may be saying. we sure didn't, but isn't it beautiful? who wants to write a loosey-goosey DSL (HTML) over strongly typed, terse functions instead? git milestone 3

as discussed earlier, i want to make the page interactive for my viewers. the goal is to ask the user a question, and provide a fixed set of responses for them to respond to. upon clicking a response, the user will be scrolled to the next question, and so on, until finally they end up agreeing to go biking. we will make a data structure to represent this basic graph traversal exercise. it's worth noting that our question set will have cycles in it. we want to trick the user into thinking that he or she still has free will in this decision. bikes or bust!

here's a snapshot of the question graph:

i'll create a new elm module to define types to marshall these values into:

now, how do we actually load our data into Elm? because the json is static, we can use elm's flags feature to provide this data on init. but before we get to using flags to load to data into elm, we need to figure out how to load the asset into the browser at all.

each elm application's true entrypoint is actually a js file. in this application we are using create-elm-app, which uses webpack to bundle and load assets, available to us for free. in this context, we can simply import <json-file>, and pass that file directly into elm.

neat. now that our data is available and being passed, we actually need to do something with it, elm side.

first off, we need to define types for flags. it needs to have the exact same shape as what is passed to Elm.Main.init({ flags: FLAGS }):

when we get the flags data, what will we do with it? the elm architecture has a recipe for this. we need to update our Model to capture and persist the inbound data:

as discussed earlier, the init function is responsible for mapping flags to our initial state. let's update the default init function:

finally, let's update our main to reflect this new workflow:

not too bad, right? it feels like a bit much at first, but we did a bit of extra legwork to make sure that the js -> elm interop went swimmingly. a takeaway that is not immediately apparent in the above code is that when flags are passed, they are typechecked at runtime as they are coerced into elm types!

at this point, in our app we can see that our model has been successfully updated via the elm debugger: 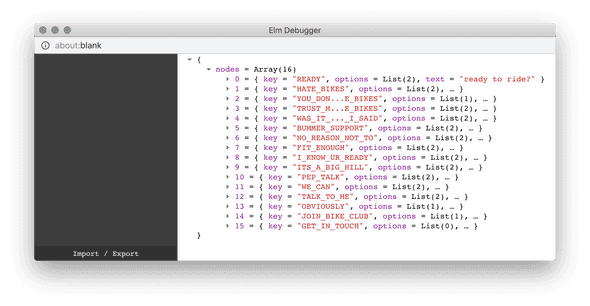 model acquired! let's render the nodes onto the page:

what a simple view! the primary view function renders two main segments: the introduction section and the nodes section. render_nodes calls render_node for each node. it's rather boring. with a little css spritzed in, we have a crude rendering implementation in place. see see git milestone 5. 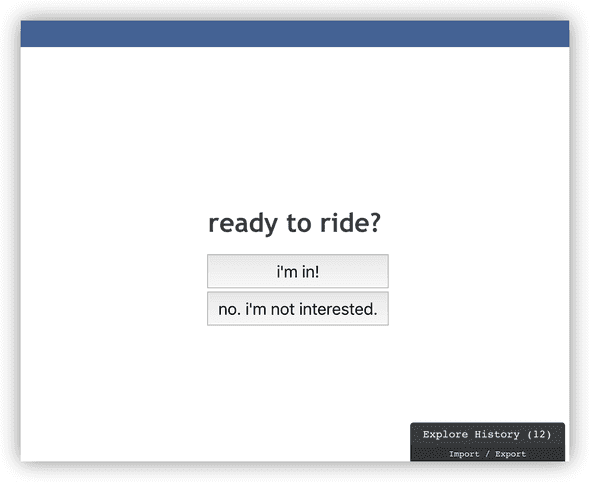 forgive the fact that nothing is particularly pretty by this point. let's instead take a peek at that NoOp used above.

when we click a button, it should navigate the edge to the associated node. but all we have is a NoOp! let's swap it with a ScrollToPane String.

there's so much more to do and cover! in fact, in my alternate implementation (src), i dig into using elm ports and subscriptions, which are actually fairly straightforward js <-> elm pubsub mechanisms. i also do a bit more styling.

regardless, let's summarize. we successfully: