Deployment of web applications and services can be difficult. It is often a maze of carefully aligning assets, pulling down & configuring executables, wiring up storage, fidgeting with networks, and more IT/DevOps tasks than most of us care to enjoy. I have experienced these difficulties enough that I pursued a new deployment strategy to ease my pains. Here's how I did it.

For years, I have shipped my software services manually. In other words, I would ship some_service by executing scp -r ./my-some_service ... to some_server on the internet, and configure it remotely. Both application & system dependencies would be installed/compiled/linked/etc on that single server. It's a completely valid approach to shipping software at the hobbyist level. However, it's certainly not very repeatable, nor is your service portable. These two properties become increasingly important as your number of services increases, even for the hobbyist! Needless to say, I had many snowflakes ❄️ floating about, & upgrading to a new server was a headache.

For perspective I had manually deployed a handful of apps/services to a single server, including:

It's arguably enough things to have some automation for deployment in place. It's also arguably the right amount of things to start worrying if services step on each other. And in fact, services did start stepping on each other. For instance, the ghost blogging engine requires nodejs version 4.x, senorsalsa.org requires nodejs 6.x+, & redorgreen required 7.x+. Tools like nvm (like python's venv) let you work around this particular issue. However, this is just one example of many of conflicts.

Portability was weak for these apps, & repeatability for deployment suffered. docker promises to alleviate these headaches, so I went in deep & dockerified all-of-the-things.

Let's get these apps deployed with ease.

How to docker-ify your services is fun, but is well covered elsewhere on the webs. We're here to focus on deployment, so that content will be omitted. 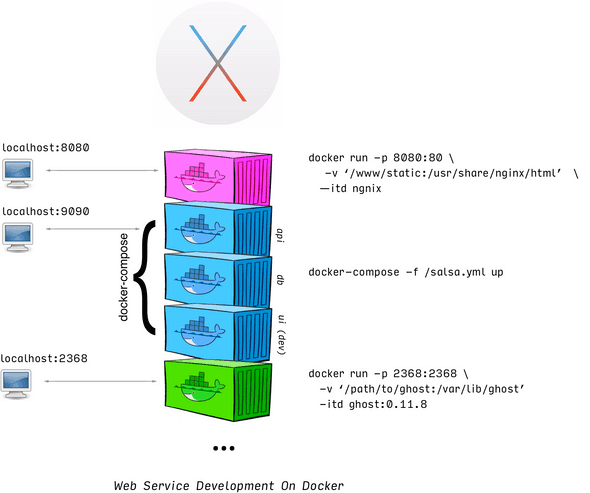 The above shows a loose approximation of some services I have running on my OSX development machine. You can see that each service is runnable via docker, and exposes itself somehow to the network. Here we see a nginx container on :8080 acting as a static file host, the dev version of senorsalsa.org exposed on :9090, and the dev version of this blog served on :2368. Each of these applications was launched manually from my shell. 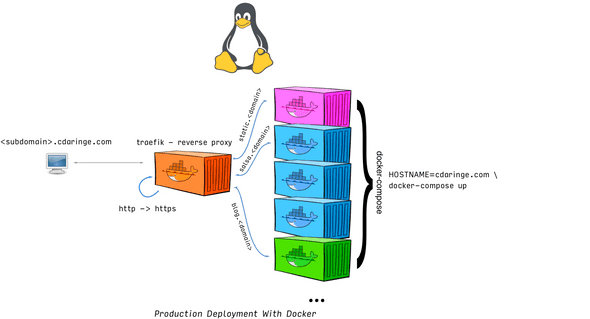 The takeaway is we only expose some apps & containers through a reverse proxy, who will also handle our traffic encryption. This enables us to only have to secure our server in one spot, versus in every app. It also gives us great routing rules, letting us partition our subdomains nicely against specific apps!

Despite an intimidating myriad of tooling, I had clear requirements to meet. My strategy for selection was to evaluate how well each toolchain (or combination of toolchains) fit the aforementioned requirements. Let's discuss just a couple.

~~ k8/mesos ~~ The big players in container orchestration are known to have a high learning curve. Further, having worked with k8, there's also a moderate amount of config & boilerplate to kick-everything off. The google team on kubes is working hard to lower that barrier to entry, but for me--the hobbyist--this is too much cognitive overhead to onboard. So, the big orchestration tools are out (k8, mesos, etc).

I know that some initial provisioning must happen each time I want to boot a new box, either on prem or in the cloud. This has to happen before I even consider putting my own applications on a machine. For instance, install docker, vim, ag, etc. Additional tasks would be to lock down SSH (e.g. disable password login) or to configure a firewall. Because I will undoubtedly need to do some basic, non-frequent maintenance, I rigged up some ansible scripts to achieve these bootstrap steps. SSH+sh could suffice for these operations as well, but I will come back to ansible later to discuss additional usage & benefits. Chef, puppet, or any other general purpose provisioner would surely work equivalently well here. Regardless, ansible is now part of my deployment stack.

Only about half of my web applications are a single image/container. Many apps are composed of 2+ containers, working together behind the scenes. Most of the time, to run an app in development, I use docker-compose. docker-compose solves a couple of difficult steps in container deployment:

There's no way I will be writing upstart, systemd, or sysv service files again. Docker eats all of that complexity away for us, and lets us declare these behaviors easily through compose. For example:

docker-compose is now in the deployment stack.

A major consideration in deploying webservices is how to expose them. If you studied the target deployment diagram above, you will have seen a reverse proxy in front of all of my apps. I'm not interested in the underpinnings of a reverse proxy--I just want something that works, and that is relatively plug and play. jwilder/nginx-proxy is an awesome project designed for hobbyists like you and me! It:

Unfortunately, there are a ton of bugs. Also, the user-experience is lacking, which we won't dig into. Kudos to jwilder for pioneering the effort, but too many hours were eaten trying to get this to play nicely. I only mention this project because it was the first I heard about that offerred first class, dynamic docker support! About when I was ready to give up and build a good-old-fashioned apache httpd image, another jwilder/nginx-proxy fan clued me in on traefik.

traefik is everything nginx-proxy was supposed to be and more! With minimal effort, minimal config, and minimal time, I had a feature rich reverse proxy running. Let's study some code.

So, how do I add a service? In production, I use a single docker-compose.yml file, wherein all of my services are declared. If a service needs to run, it has to be declared into that file.

In order to know how and what to proxy, traefik, in docker-mode, looks for labels. traefik.frontend.rule=Host:$HOSTNAME tells traefik that when a request comes in for say, Host:cdaringe.com, to forward that request to the blog service. You'll note that I match on many different Hosts. Of course, traefik also lets requests be matched on other criteria as well. I didn't need any :).

That's it! Using ansible, docker, docker-compose, and other universal *nix-ish tooling, we can do single machine, multiservice deployments.

Let's suppose I want to add a new app. For realism sake, let's suppose that the app needs to write to disk. Suppose the app is called whoareyou (because we've all seen enough whoami apps). The app will be a simple server that writes the visiting users' IPs to disk. Here's the workflow, high level, top to bottom:

And that's it. There is certainly room for more improvement. However, for now, I've met my requirements, and feel confident that incremental changes can be deployed sanely and reliably!